CARTERTON band Spank are blazing trails in the region as Spank Invites, a once-a-month music event highlighting live music in Wairarapa and offering out-of-town bands a chance to reach audiences here at home.

“They came all the way from Whanganui and were fresh off the back of the Battle of the Bands National Final. Drones are an amazing and stupendously talented metal band that will knock your socks off,” Nikki said.

“Not your usual metal band, they will appeal to fans of music who appreciate talent and amazing trancey rhythms and beats. Ask our Sheldon, he doesn’t usually like metal but he really loved Drones.”

Nikki King, lead vocalist and manager of Spank, said she saw an opportunity to host regular music events in Carterton after the successful launch of their EP “Slap-up and Noblest“ at Heart of Arts in Carterton.

“The acoustics and vibe of the venue was amazing” Nikki said, “and we thought, well why not do this on a monthly basis.”

“The plan really started to come together after I started scouting for bands on a Wellington Facebook musicians’ group,” Nikki said.

“I put a shout out for musicians to do the inaugural gig and was contacted by Simon Murcott, who really loved the fact we were trying to stimulate music in the Wairarapa.

“He offered to help out with the gig on an experimental basis by supplying his sound and lighting equipment.”

Having reached the regional finals of Battle of the Bands in Manawatu, Nikki said, Spank had made many band contacts beyond the region – including fellow regional finalists Drones – and thought Spank Invites was “an ideal chance to work our new network of band friends”.

“There was a modest turnout but both bands considered the evening a success with many in the audience eager for the next event.

Spank @ Heart of ArtsWe had a great weekend in Carterton playing with Spank. We took a few quick videos of Nikkis wicked Trumpet parts and a cool instrumental section. Head over to their page to check em out and give a 'like'. They are the reason we got to play in such a cool town, meet new fans and friends and make some more connections.

DRONES - Carterton HighlightsCarterton was great. Once again thanks to Spank for bringing us out, it was our pleasure to play. Lots of new connections and some plans in the works. Here's a highlight video of us playing!

Spank are trying to invite quality acts with a difference to the Wairarapa.  “Each band is selected because of their quality but also because they are doing something fresh and exciting.  Music is art and art is meant to be challenging.” says King.  We want people to come to our gigs knowing that they will get something new and fresh.”

The event is also bringing together many other businesses. Food is provided by Aurelia Restaurant in Martinborough and local printers Lamb Peters are sponsoring the posters. Nikki’s business, Fuzzbox Designs is supplying artwork.

Initially all the events were to be hosted at Heart of Arts but due to licensing restrictions, The Dead Zephyrs gig is being moved to Carterton Rugby Club on 22nd October.  Tickets are priced at $10.

Drones will be back in Wairarapa on January 13th at Thatsus Music House alongside Spank and The Dead Zephyrs. 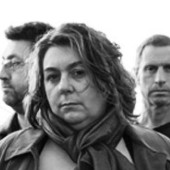 Nikki is a website designer, graphic designer, musician, writer and mum of three boys in Carterton, Wairarapa. Nikki is an avid supporter of music and art.